Welcome to the MD Drummer portal for Sheila E. Here you can explore both public and Modern Drummer exclusive content related to Sheila E. Our drummer Portal features news, lessons, videos, *Magazine Articles, MD Products and more. Be sure to navigate to other drummer pages by selecting their name in the dropdown above or by clicking Drummers in the navigation menu.

Sheila E., is an American percussionist, singer, author, and actress. She began her career in the mid-1970s as a percussionist and singer for The George Duke Band. After leaving the group in 1983, Sheila began a successful solo career, starting with her critically acclaimed debut album, which included the career-defining song, “The Glamorous Life”. She became a mainstream solo star in 1985 following the success of the singles “The Belle of St. Mark”, “Sister Fate”, and “A Love Bizarre” with the last becoming one of her signature songs. She is commonly referred to as The Queen of Percussion.

MD Mag ArticlesMD Web NewsMD PodcastsMD Products
Note: Some MD articles are only available in pdf format. Those articles do not appear in this list. Subscribers to Digital and All-Access can view every Modern Drummer issue in their available formats. Browse all MD issues from our archive here.
July 2021:
2021 Readers Poll Results

Celebrate Your Choices for the Extraordinary Drummers of the Past Year It’s that time again for the Modern Drummer staff to thank the community for making possible our annual Readers Poll. Your enthusiasm for all things drumming, your knowledge of drum culture, and your well-considered votes are what have steered …

Our Newest Hall of Fame Member Defines Purpose and Passion Sheila Escovedo’s journey from growing up in a legendary family of percussionists, to seeing Karen Carpenter playing drums when she was just eight or nine, to performing with her dad Pete in Azteca when she was 15 years old, and …

A lot of percussionists—and drummers, too—have that problem of overplaying. The way you overcome it is by developing discipline. I learned all about discipline when I became a session player. I’d go into the studio and the producer would say, “Okay, let’s hear what you hear on the song.” I’d …

15 MD Cover Artists Reveal the Big Ideas That Put Them on the Road to Success The abundance of educational material online, as well as great teachers to mold your passion and enthusiasm into technique and musicality, are massively beneficial to those seeking proficiency on the drums. But even with … 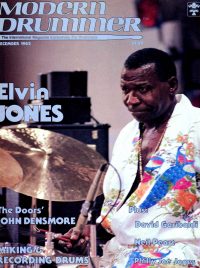 Sheila Escovedo is striking and diminutive, and can spark a band with the flash of a smile or an outrageous, ingenious percussion lick. 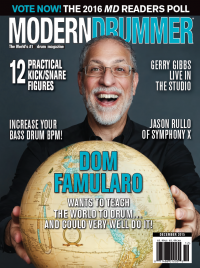 Highly regarded for manufacturing some of the finest keyboard and timpani mallets for concert and marching players, Innovative Percussion also offers a range of drumset sticks for jazz, big band, studio, rock, Latin, and other contemporary styles.

Monday, November 1, 2021, on Def Leppard drummer Rick Allen’s 58th birthday, we are announcing a special upcoming auction called ’12 Drummers Drumming’ to benefit his Raven Drum Foundation. For the past 37 years, PNC has calculated the prices of the 12 gifts from the classic holiday song, “The Twelve Days of Christmas.” The PNC …

The Queen of Percussion, Sheila E., is having a great summer. Besides being back to touring, it was announced in June, that the Latin Recording Academy will honor Sheila E. and her father Pete Escovedo with a Lifetime Achievement Award on November 17th in Las Vegas. On July 20th, Modern Drummer, the worldwide leading …

This year, because of Ringo and the good people from Modern Drummer magazine, I got to share the experience with Sir Richard in person!

The November issue of Modern Drummer includes a news item on the hunger-awareness campaign Beat Hunger, which recently brought together a number of pro drummers to help publicize the ongoing need for nutritious food and support for Haitians living in extreme poverty. A few of the participants were kind enough …

Latin Percussion (LP) recently hosted artist “family reunion” events in both New York and Los Angeles. LP artists were joined by staff and executives from LP’s parent company Drum Workshop, Inc. to celebrate the legacy and to toast the future of the more than fifty-year-old percussion brand.

Sheila E played a one-of-a-kind DW custom kit as part of a special musical celebration honoring Prince at the BET Awards, June 26 at the Microsoft Theater in Los Angeles.

Category: Drummers, On the Beat
On the Beat With Katie Herron of StarBenders: Reckless Punk and Classic Rock ’n’ Roll

Hi! My name is Katie Herron and I am the drummer in the glam punk ’n’ roll band, StarBenders. I was born and raised in Decatur, Alabama, affectionately known as the River City. The conservative nature of the South birthed a fire of rebellion and the need for individuality….

As a traveling musician in the traditional big top, I am able to implement my strong music theory background and improvisational skills while providing accompaniment and action on stage as my role of the “Goddess of Rhythm.???

Category: Drummers, On the Beat
Richard Danielson of Vintage Trouble

My name is Richard Danielson, and I’m the drummer for Vintage Trouble. Our music has been described as many things. I like to call it “primitive soul.???

Category: Drummers, On the Beat
Keith Harrison of the Pineapple Thief

Question: What do you call a guy who hangs out with musicians? Answer: A drummer! With the prospect of being the butt of such drummer jokes, I have to ask myself the question, “Why did I choose to play drums????

Hi MD readers! This is my first ever blog, and I wanted to tell you how I got to work on the upcoming Superman soundtrack.

Category: News, News and Events
D’Arcus Curry, Angieszka Matusczak, and Karmi Santiago Announced as Winners of Hit Like A Girl 2012

The sponsors and supporters of “Hit Like A Girl 2012??? are proud to announce the winners of the first ever drumming contest for girls and women. (read more)

by Billy Brennan The throne is the foundation of any player’s groove and is an incredibly important purchase for any prospective customer. As is a common theme in drum-related products, there’s no right or wrong choice—round versus saddle style, soft versus firm, and spindle versus hydraulic are just a few …

Category: Drummers, On the Beat
Jess Bowen of the Summer Set

My name is Jess Bowen, and this is my second blog for MD. If this is your first time reading, here’s a basic run-through of my band and myself…

by Rich Mangicaro The longtime Lou Reed drummer’s fascinating musical journey. Tony “Thunder??? Smith is one happy guy. Ever since I first met him over twenty years ago, I’ve found that joy and excitement just emanate from him when he’s talking about music. He couldn’t hide it, even if he …

Sheila E, daughter of veteran percussionist Pete Escovedo, developed her natural talent by watching family members and friends gather in her home. Sheila was only eighteen when she carved her spot in music history, playing the hippest of gigs, like sessions with George Duke and Herbie Hancock….

Hello, humans. My name is Jonathan Syverson, and I’ve never actually written any sort of blog. But as anyone who knows me would tell you, I absolutely LOVE talking about myself, and since Modern Drummer was kind enough to come asking, it would be my pleasure to oblige. Back in …

Category: Drummers, The Greats
Dennis Chambers: Fiercely Comin’ At You From Multiple Directions

Dennis Chambers was born on May 9, 1959, and started playing the drums at the young age of four. By his sixth birthday he was already playing in nightclubs. Strictly self-taught, at the age of eighteen Dennis went straight from high school to playing with George Clinton’s Parliament Funkadelic, where …

I’m twenty years old and a singer/songwriter/musician and drummer/keyboard player for Petrel, a rock/pop band my sisters Jessica and Destiny…

I’m twenty years old and a singer/songwriter/musician and drummer/keyboard player for Petrel, a rock/pop band my sisters Jessica and Destiny…

Since moving to New York in 1996, Allison Miller has thrived by refusing to acknowledge musical borders. Alli, as she likes to be called, has allowed her sincere love of pop and rock music to ground her jazz playing–and her passion for jazz to elevate her pop prowess….

In 1989 Drum Workshop vice-president John Good asked me if I could throw a curve ball. “You bet,” I said. And that was my welcome into the DW family. I was now an official Drum Workshop artist, the quintessential symbol of a professional drummer who made it…

Felix Pollard’s drums weren’t the only thing pounding after he got a last-minute call to play for Lionel Richie’s 2004 performance on Oprah. The thought of performing for two legends in his hometown of Chicago with no rehearsal gave the drummer the worst headache of his life….

John Blackwell always listened to his dad’s advice, and it’s paid off, big time. “Growing up, my dad used to tell me, ‘If you want to make any money in this business, play in the pocket.'”…

A rhythmic force of nature since its inception in San Francisco’s Mission District in 1966, the Santana band has always set the bar high. And now, with superstar drummer Dennis Chambers joining percussionists Raul Rekow and Karl Perazzo, the bar (and the expectation) is even higher….

Welcome to MD’s #ThrowbackThursday Podcast with Sheila E.! We had a blast with Sheila and honored her with the announcement of winning the Modern Drummer Hall of Fame Award; picked by the readers of MD. Sheila made history for us with this prestigious award as the first-ever woman to be …

This week’s Modern Drummer Podcast features the newest member of the MD Hall of Fame, The Queen of Percussion, Sheila E. Join Billy Amendola and David Frangioni as they announce the award to Sheila and congratulate her as the first woman ever to be inducted in the magazine’s 45 year …