The Broadway mainstay has written a method book that he refers to as a “multivitamin for your ears, hands, and concentration.” Keith Carne, MD contributor and drummer with the band We Are Scientists, finds an immediate place for the program in his own workouts, and speaks with the author for some background and guidance through it. 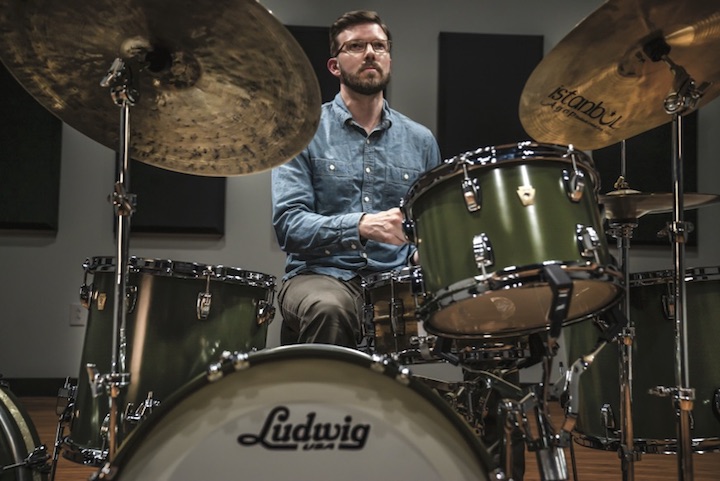 It was shedding the Rudimental Ritual that finally got me to hunker down and learn my rudiments. Well…almost. At that point I was already in college studying jazz music, and had been playing drums for some years. The Ritual—which was popularized by John Ramsay’s book The Drummer’s Complete Vocabulary: As Taught by Alan Dawson—sets the rudiments over a samba foot pattern. It falls somewhere between percussion piece and extended warm-up routine, and like all other pieces of quality drum literature, it got me excited to examine something I’d somehow glossed over.
That was fourteen years ago, and I’ve continued to use the Ritual as a starting point during extended practice sessions ever since. Yet I’ve never been able to memorize it. When it comes to rudimental study, I tend to get lost in the alphabet soup of names and stickings; I don’t remember much after paradiddles, doubles, flams, and rolls. (And isn’t everything else just a combination of those fundamentals anyway?) So it’s not surprising that when I play the Ritual, I wind up thinking more about how to actually play many of the combinations than dynamics, cleanliness, groove…musical considerations. 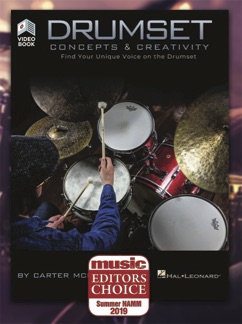 I never realized how much the strain of remembering rudiments got in the way of my musicality until I began working through Drumset Concepts & Creativity, a new book from Carter McLean. Like Mr. Ramsay’s book, Drumset Concepts & Creativity centers on an expansive piece of drum music that gets the blood flowing and kickstarts rhythmic ideas across the drumkit. McLean calls his exercise the Kaleidoscope, and even though it can function as a warm-up, I hesitate to describe it that way.
After all, McLean admits that he doesn’t find much use for that kind of drum music. “I’ve never really warmed up,” McLean tells Modern Drummer. “I think because I play so much and I’m always working on stuff at home or teaching, my hands are always there…I’m never worried that they’re not going to work.”
He describes the Kaleidoscope as a “multivitamin for your ears, hands, and concentration.” Essentially, it’s an accent study that provides a process for playing and hearing phrase groupings over time and polyrhythms. Players begin by accenting every 16th note for two bars, then displace those accents one 16th note at a time: every second note (accenting downbeats, &’s), then every third (1, a, & of 2…), every fourth (every downbeat), and so on until you only accent every 8th stroke. After completing a full round of the accent phrases, you add foot patterns, beginning with quarter notes on the hi-hat and ending on a three-over-four pattern between the hi-hat and kick. After you can make that groove (and this exercise can really groove), you swap out different stickings. When you get all the way to the end, the exercise resets as 8th-note triplets.
McLean, a player with a deep pocket and startlingly clean articulation, is probably best known as the principal drummer for The Lion King on Broadway. He’s been working a lot with acclaimed jazz/funk guitarist Charlie Hunter too, and on that gig he gets to explore musical ideas he can’t work out on a rigid gig like a Broadway show.
No matter the musical context, McLean understands the importance of clarity in both playing and communication. This is why he has become a respected educator in recent years. He describes his aesthetic on the drums as “honest,” and it’s easy to understand what he means when you hear him play. In his grooves you can hear the intention on every single drum simultaneously. When he plays phrases that stretch over barlines, they make musical sense, and it’s usually easy to track the path that leads back to the downbeat. Musicality is inherent in his playing. McLean’s honesty extends to the way he describes his book as well. “I didn’t want [the book] to be a bunch of weird exercises mashed together,” he says. “The whole book is actually a very simple concept. Honestly, once you look at it and get it in your head, you don’t even need the book anymore.”
As someone who’s spent about six weeks with the Kaleidoscope, I can vouch for that. (Though I was grateful to have the book as a visual guide for the first month, especially when the phrases get squirrely and extend over barlines and require lots of coordination.) This ability to forget about the printed material and allow the music to unfold logically is what makes the Kaleidoscope such a valuable educational tool. It’s what separates Drumset Concepts & Creativity from other thoughtful, helpful pieces of drum music that also seek to bolster your coordination and musicality (like the Ritual). The process of working this exercise out doesn’t cloud your consideration of music. It deepens it. After all, McLean believes musical consideration should be paramount, even if your focus in the practice room for the day is technical.
“It’s emotion you’re trying to convey, not technique,” he maintains. “Once you start talking technique and stickings, the music side of things is gonzo—you’re doing math. I’m always trying to keep music in the forefront. That’s why the Kaleidoscope Exercise ends up grooving if you play it correctly.
“I don’t think about rudiments; I think of things like phrases,” McLean adds. “Whatever the sticking is to get the music out is what’s happening. Ninety percent of the time you’re either playing a single or a double anyway.”
Drumset Concepts & Creativity comes with about three and a half hours of supplemental video material, most of which is taken from McLean’s “Four Hands Drumming” web series. In them he unpacks big concepts like phrasing, practice, groove construction, and tuning, among others. He deals with these topics practically, dispensing knowledge that is both useful and immediately applicable without getting lost in technical or conceptual weeds (such as, don’t mess too much with the tuning on your bottom head after it sounds pretty good).
McLean even leaves his musical flubs and stutters in the final product. He begins one segment with a disclaimer: “I haven’t warmed up today. You guys are going to see me make mistakes…,” and the fact that we do is pretty refreshing. It’s yet another way that McLean is honest with us.
“I wanted [the videos] to be real,” McLean says. “People make mistakes. I don’t want it to be exactly perfect and quantized. That to me doesn’t feel good. All those little variables are what make people sound like them. If you quantized Bonham, Gadd, and Jim Keltner, they’d sound like crap. It’s all of that weird little lope kind of stuff they add to their playing that makes it cool.
“When I sit down I’m not trying to prove anything to anyone,” McLean says. “I’m not trying to show off technique or that I can groove this way. I’m just sitting down and playing what I feel. I don’t have anything preconceived. I really trust my gut.”
Drumset Concepts & Creativity gives us an organized process for beginning that difficult work for ourselves, so we can learn to do the same.

It’s not a warm-up, but it can be! It’s much more than a warm-up (and if you play it start to finish it’s quite long). But it gets the blood flowing to your hands and feet (something many warm-up routines neglect), and playing accent phrases in five and seven gets you thinking about landing on lesser explored parts of beats and measures. In the phrasing video, McLean talks about breaking from conventions— not hitting a crash on 1 by default, for example—and the Kaleidoscope exercise is a perfect way to go through the possibilities in an organized way. Start your practice routine by playing through some of it, and you’ll set a tone early that will help you consider where else a crash might go.
The Kaleidoscope should groove and feel good. Above all else. Don’t move on from an accent grouping until you can hear the groove in it. This will make applying it to a musical context much more fluid.
Try your own stickings. McLean suggests taking the Kaleidoscope further by playing it with different stickings after you can make it feel good using alternating singles. He suggests using doubles and RLL. You can try out other sticking combinations, too. I applied paradiddles and RRL to the exercise and really liked those stickings, especially when spread across the kit.
Use some of the simpler rudiments as stickings. I may have just spent much of the review seemingly hating on rudimental study, but it is possible to find an expressive voice using them. Jo Jones composed most of his solos this way, and they’re incredible. But much in the same way that we don’t use stock phrases from the 1950s in conversation (when was the last time you heard someone say “golly” or “gee-whiz” unironically?) we should update our vocabulary on the drums.
Prioritize stickings. Rather than making your way through the whole piece one sticking at a time, explore each accent grouping with all three stickings before moving on to the next.
Replace the accents on the snare with other textures (a tom or a cymbal) or other fundamentals (a flam or a buzz). Maybe even try replacing the snare accent with a rest, or a kick drum for a new foot component.
Flip the feet. McLean’s exercise utilizes a three-over-four foot pattern, with the hi-hat playing quarters and the kick playing dotted eighths. Flip them around so that the kick outlines the four and the hi-hat outlines time in three.
The later part of the exercise sounds really cool when you play it very, very slowly. When you begin playing three-over-four with your feet, try to keep it flowing and feeling precise at 35 BPM.
“Being relaxed is always beneficial,” says McLean. “Nothing good comes from anxiety. Be comfortable with making decisions, regardless of what people think, and stick with it. This is in music and in life. Sit down, state what you want to do very clearly, be able to back it up with a lot of proof, and you’re in a good position.” 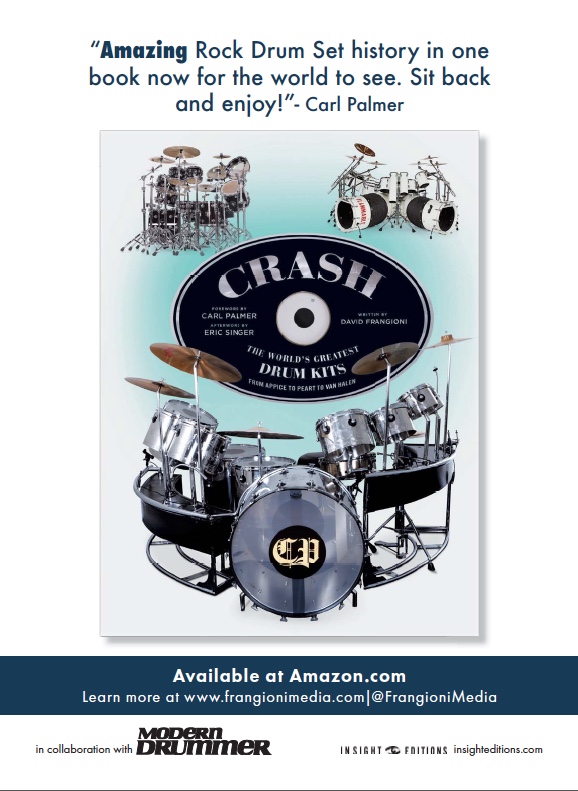 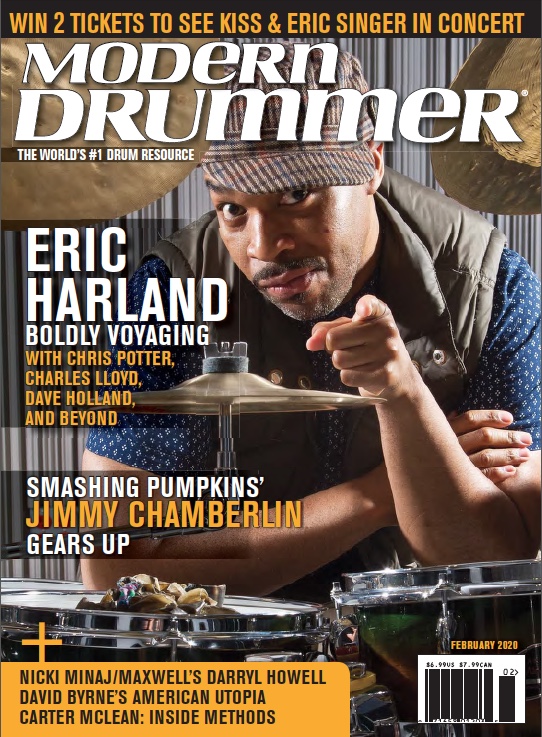 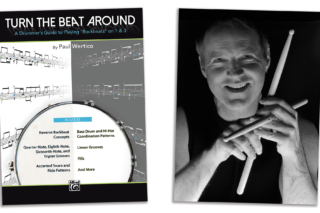 Paul Wertico’s Turn the Beat Around
by Martin Patmos 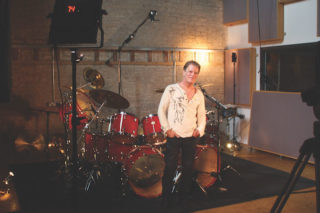 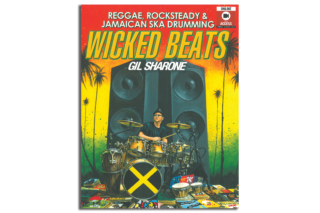