Talking About Tours and Projects

Hello Modern Drummer readers, thanks for checking me out here in the awesome “On The Beat” section! I am checking in between my gigs with Jon Bon Jovi & the Kings of Suburbia. We just finished our first Runaway Tours cruise to Nassau, Bahamas and we are headed out for a second cruise this August out of Barcelona, Spain. (Look for more cruise info on MD online and MD social media soon.)
I’ve been playing with Jon since 2008, when I first performed with him at Red Bank, New Jersey’s famed Count Basie Theatre at the holiday charity Hope concert. In 2012, Jon formed the current KOS band; I get to play a selection of classic Bon Jovi hits mixed in with some of Jonʼs favorite “jukebox” tunes. The gig is a high intensity show and it is so much fun for me to play songs that have been the soundtrack to people’s lives for the past thirty-five years. In 2013 I performed with Bon Jovi on the South America leg of their Because We Can tour, including performing at the massive Rock in Rio in Rio de Janeiro, Brazil.
When I’m not out on the road I keep busy with a variety of projects including recording, teaching, and leading my own power rock trio. In 2014 I performed on the soundtrack of the feature film Lullaby starring Terrence Howard and Jennifer Hudson. I also maintain a weekly schedule of private students in addition to teaching two classes at Rider University in Lawrenceville, New Jersey. I’ve also had two articles published in Modern Drummer magazine. 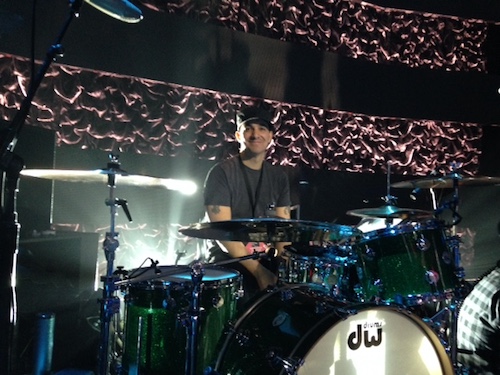 It is my great fortune to endorse DW drums, Paiste cymbals, and Ahead drumsticks and cases. My go-to gear, whether I’m on the road or playing local pick-up shows, includes DW Collectors series maple drums (including a DW metal snare drum) and 9000 hardware. Paiste Signature, 2002, and Giant Beat series cymbals are also never far from my setup.
A huge thanks to Jon Bon Jovi & the Kings of Suburbia and our entire crew, Runaway Tours, everyone at Sixthman, DW, Paiste, Ahead, Billy Amendola, all at Modern Drummer, and all of MDʼs readers. Thanks again for taking a moment to read and see you all down the road!
Watch Rich’s Paiste Artist video clip

For more on Rich, visit www.richscannella.com.