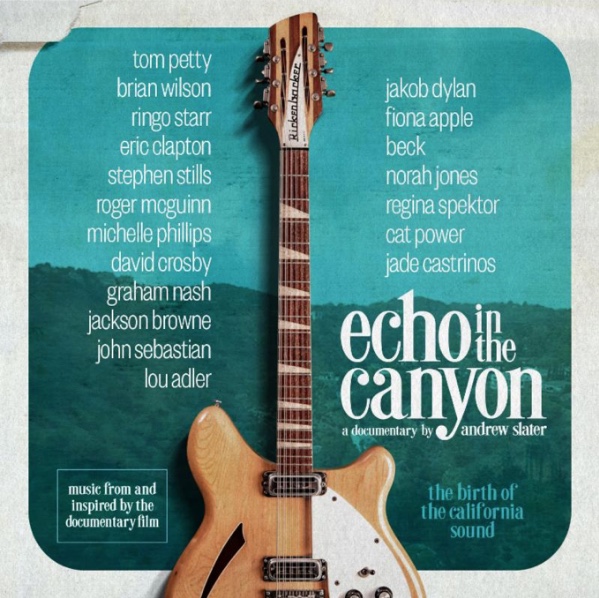 WATCH THE TRAILER FOR ECHO IN THE CANYON HERE

Echo In The Canyon – the illuminating new documentary film directed by Andrew Slater that explores the beginnings of the Laurel Canyon music scene (1965 -1967) through the stories of those who lived it, and the artists who carry its influence to this day – will be accompanied by a soundtrack celebrating the music of that era, to be released May 24th on BMG. The soundtrack features new studio recordings of timeless songs by The Byrds, The Mamas & The Papas and more, as interpreted by artists from the film including Fiona Apple, Beck, Jade Castrinos, Cat Power, Eric Clapton, Jakob Dylan, Norah Jones, Regina Spektor, Stephen Stills, and Neil Young, plus songs exclusive to the soundtrack including a special performance of the Monkees’ classic “She” with Josh Homme.
For an early taste of the soundtrack, listen to Jade Castrinos (formerly of Edward Sharpe and the Magnetic Zeros) and Jakob Dylan interpret “Go Where You Wanna Go,” the Mamas & the Papas’ very first single in 1965.
And tune in on Friday, April 26th at noon EST for a live performance broadcast from WXPN’s World Cafe Live featuring Jakob Dylan, Cat Power, Jade Castrinos and the Echo in the Canyon band: https://www.vuhaus.com/live/echo-in-the-canyon-free-at-noon
The Echo In The Canyon soundtrack was produced by Slater – who has worked with Warren Zevon, Fiona Apple and Macy Gray – with recording sessions taking place at some of the legendary LA studios featured in the film – including Sunset Sound, Western Recorders and others – where the original versions of many of these songs were recorded.
The Echo In The Canyon documentary features in-depth interviews with Jackson Browne, Eric Clapton, David Crosby, Tom Petty (to whom the film is dedicated), Michelle Phillips, Ringo Starr, Stephen Stills, Brian Wilson and others. The songs of the era provide an entry point for Jakob Dylan and his contemporaries as they discuss their influence, and record and perform them.
Released by Greenwich Entertainment (Free Solo), Echo In The Canyon opens in Los Angeles on May 24 at ArcLight’s Cinerama Dome and The Landmark, followed by a New York opening at the Angelika and The Landmark at 57 West on May 31. Both openings will feature performances by musicians from the film all weekend. The film will expand to theaters across the country in June.