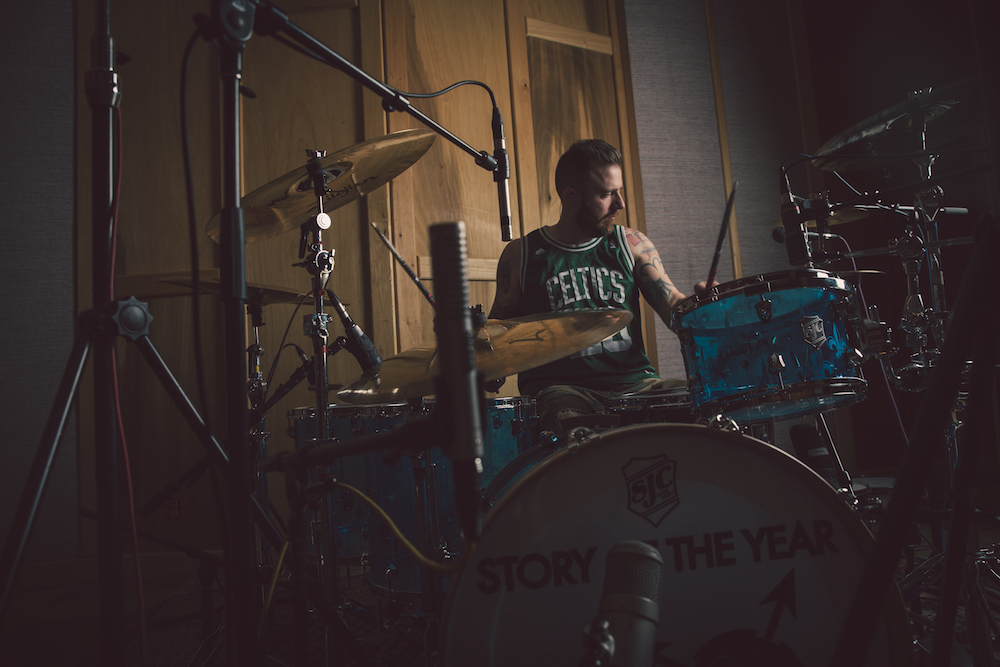 Hello everyone in Modern Drummer world! This is Josh Wills with Story of the Year from St. Louis, Missouri and I can’t begin to tell you how excited I was to start this new record!
We had been on a very long break from doing anything new with Story of the Year. Finally, one day our guitar player Ryan sent an email and said, “I think it’s time.” So demos started flying back and forth and the music that was being presented was so exciting. Not only because it had been so long, but also because it all had just a different passion to it than the previous couple records. It was almost like we were writing our first record again. There was no timeline, no pressure from a record label to get it done by a certain time, just music flowing organically.
When we decided we had enough songs/ideas, we reached out to some people we thought would be the right fit to drive this ship of a new record—enter Aaron Sprinkle. We knew and respected him from our friends in Anberlin. (We love that band!) With the music that we had we knew he was the dude.
After meeting with him, we decided that this record was going to be recorded a bit differently than any of our previous ones. We did all the pre-production through Dropbox and emails. Ryan recorded guitars at his house by himself first. Sprinkle came to St. Louis to Dan’s studio and did vocals next. We did bass after drums. It usually goes drums, bass, guitars then vocals—everything was all out of order. It was very strange.
Then it was my turn. We drove to Nashville to track drums at OmniSound Studios. Tracking drums for me is a bit of a process mentally. There is something very strange about recording something in such sonic detail while there are four to six people in a separate room listening and watching your every move. I hate when I am having trouble nailing a part and I know there are people watching, listening, and waiting. In my head they are all saying, “Dude, what is taking so long!?” Probably not true, but that’s what I’m thinking they are thinking. So that just makes things take longer than they should. It can be very frustrating.
We tracked the drums and cymbals separately on about half the record. Wow! It was almost like learning how to play drums again left handed on top of making sure you track everything as perfectly as possible. It ended up being totally worth it in the end though. Tracking them separately, we were able to get such great drum sounds without the bleed of the cymbals and vice versa. It gave our mixers a ton of space. The end result, in my opinion, is amazing.
I am so proud of this record. I love that everyone is finally able to hear new music from us. It was totally crowd funded by our amazing fans and I have endless gratitude to them all. Love you guys and girls!
Thanks for reading and please check out our new record Wolves. It is available on all digital platforms.
Watch Story of the Year’s video for “Bang Bang” here