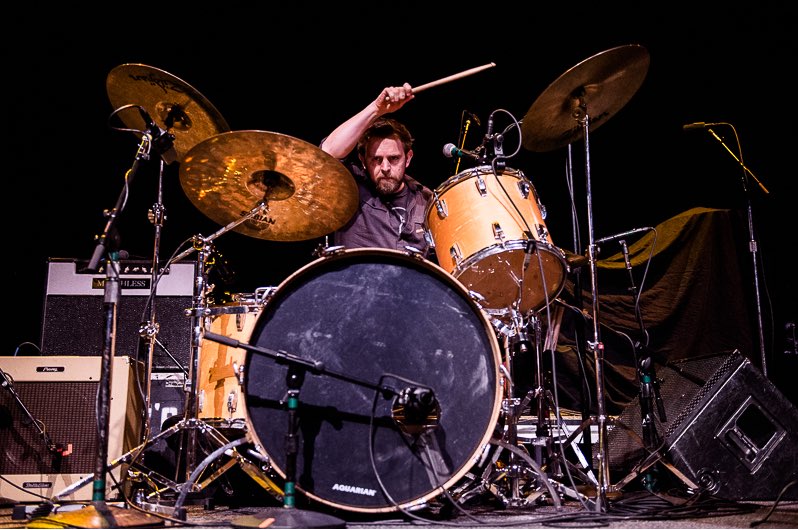 “A genius is the one most like himself.”—Thelonious Monk
Dear Modern Drummer,
I started reading you in eighth grade. It was 1996. Bill Stewart was on your cover. There was a lumpy bass drum in the back underneath the words “Drumkit of the Month.” How could I forget?
A lot has happened in the intervening years. I’ll spare you the details of high school ska bands, thrilling years at Berklee, early gigs traveling the world on cruise ships, the continuing education of pit orchestras, jazz combos, wedding bands, singer/songwriter gigs of every conceivable variety, and the slow realization that while I’d been lugging gear in and out of rock clubs, jamming to my headphones, and gradually learning how not to embarrass myself in the studio, somewhere along the line, I had become legit.
A wide variety of experience births a beautiful byproduct: confidence. Confidence is earned, but it’s also seized by those bold enough to claim it for themselves. However you come by it, you’re going to need it if you ever hope to sound like yourself.
The working musicians I play with have a running joke that takes place over a phone call: “Hello? Sure, I can do the gig! What’s the gig again?” Here’s the joke: we say “yes” without even knowing what we’re being asked to do, because it doesn’t matter; we’re gonna nail that gig.
Getting the call is the hard part. Once you get the call, all you have to do is whatever is expected of you, really well. And therein lies the fun, MD. It’s not hard to get better when you love to play, or to chart your progress when you put in the hours. What’s hard is not knowing how you will pay next month’s rent, or not giving up and getting a job you don’t want so you can afford groceries, an Internet connection, and other attractive staples of the lives your childhood friends are living. What’s not hard is showing up on the day that you get to do the thing you’ve always wanted to do.
Those hardships teach you to play in a way that makes people want to listen; that is, you learn to sound like yourself. While you stayed in it, a lot of your competition quit. Ten years in, you can compete alongside your peers, maybe even your heroes. One day, one of them will have a scheduling conflict and he could use the phone number of a strong player like you. Now you’re playing in the band you used to pay to go see, a band you love. That’s what happened to me.
MD, here’s the truth: By the time you reach the goal you had set, you’re already hard at work on the one off in the distance. And while you’re planning for the next audition, the next tour, the next fill, that well-placed confidence is going to be there to remind you that you’ve got this.
Believe me, eighth grade you are pumped.
For more on Mike and his projects and bands, please visit hootsandhellmouth.com, hahatonkamusic.com, pretendcollective.com, mattnakoa.com, and thedanband.com.
Check out the video link to the song “Oh! The Bugs” which is included on the upcoming Hoots & Hellmouth EP Uneasy Pieces due out in August 2017.

Mike Reilly tours and records internationally with Hoots & Hellmouth, Ha Ha Tonka, the Dan Band, Matt Nakoa, and is currently recording his first solo record under the name Pretend Collective on The Giving Groove record label. He is currently drumming, singing, and acting in the new Off-Broadway musical based on the songs of the Grateful Dead, opening in New York City in October 2017.
The Giving Groove is a full-service, independent label that is artist-friendly and socially conscious in that it donates half of the album proceeds to a music charity of the artist’s choice. Artists signed so far include Hoots & Hellmouth, the Dead Milkmen, Oolala, and Decontrol, with more being signed over the summer. Founders Matt Teacher and Mike Lawson, who are musicians and also own and operate Philadelphia’s Sine Studios, want to help artists realize their musical vision while giving back to the community. Artists have paired up with charities such as MusiCares and Pass the Beat, as well as Philadelphia-based charities like Girls Rock Philly and Art Sphere Inc. For more information on The Giving Groove, please visit TheGivingGroove.com.