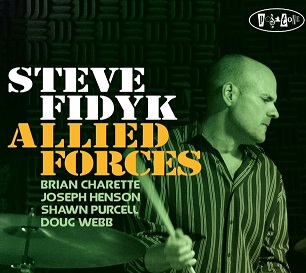 Hello, On the Beat readers. Steve Fidyk here. You may be familiar with the column Jazz Drummers Workshop that I have been contributing to for the past five years in Modern Drummer magazine. I’ve also been performing as a member and featured soloist with the Army Blues Jazz Ensemble for over twenty years! I’m blogging today to inform the MD family of readers of my latest solo CD effort, Allied Forces.
Allied Forces is my second album for the jazz label Posi-Tone. I had the pleasure of leading a great group of people and musicians, featuring tenor saxophonist Doug Webb, alto saxophonist Joseph Henson, guitarist Shawn Purcell, and organist Brian Charette.
We recorded this on a very cold day in New York, on January 18, 2016, and the album was tracked in one session. At the end of the day, I am very proud of the fact that we were able to capture this music in a single session with very minimal edits. We had one two-hour rehearsal for this date the previous week, and producer Marc Free and engineer Nick O’Toole listened and made suggestions as we hashed through the compositions. When we went into the studio and tracked, we recorded thirteen pieces, but two were cut due in part to the program flow and time constraints with the CD format.
There are eleven compositions on Allied Forces, and six of them are my originals. One of my favorite tunes from the record was the second song I wrote for the project, called “Gaffe.” I came up with the title as an extension (in part) from a tune I wrote for my last recording, called “The Flip Flopper.” A “gaffe” is an unintentional act or remark causing embarrassment to its originator—essentially a blunder. It’s obvious that Washington, DC is a political town, and I’ve certainly witnessed my share of gaffes throughout my years living and working there.
Another highlight from this recording is the tune “High Five,” which was the sixth and final song I wrote for the project. The concept and inspiration came while watching a video of the classic Dave Brubeck Quartet playing “Take Five” with my youngest son Joey. Joey is named after the late, great drumming legend Joe Morello. I first met Joe when I was a student at Wilkes College when I was eighteen. The college jazz ensemble was performing at the Mansfield State Jazz Festival in Mansfield, PA the fall of my freshman year. My jazz band director Tom Heinze knew Joe very well and suggested that I contact him for lessons. Morello did a clinic at the festival, and afterward I sheepishly asked if he would have time in his schedule to teach me. He gave me his number and said to call his wife Jean to schedule the lesson. It took six months for me to have the courage to call and schedule that lesson, and I’m so thankful that I did. This was back in 1987, long before the distractions of cell phones, computers, and iPhones.
I would take a two-hour lesson every two weeks with Joe throughout my college years. After joining the military and being stationed in DC, I would drive up to see him for periodic checkups to make sure my form, technique, and coordination were on track. Joe is responsible for developing my sound and reflex for music. My teaching at Temple University in Philadelphia, PA is based in part on his teaching and style of presenting information. As I listened with my son to that classic recording and drum solo, Joey turned to me and said, “Hey dad, why don’t you write a tune in 5/4 and call it ‘High Five.’” I set out to come up with a new 5/4 rhythm that was different from the original classic accompaniment to Morello’s solo (played by Brubeck and Eugene Wright). The rhythm I conceived is the backbone of the tune and can be heard throughout the melody and drum solo section as homage to Joe and his work with Brubeck.
Listen to the song “Gaffe” from Allied Forces here: soundcloud.com/posi-tone-records/steve-fidyk-gaffe?in=posi-tone-records/sets/steve-fidyk-allied-forces/s-dzrz4.

For more information on this project, please visit www.stevefidyk.com and www.posi-tone.com and thanks for reading and listening!