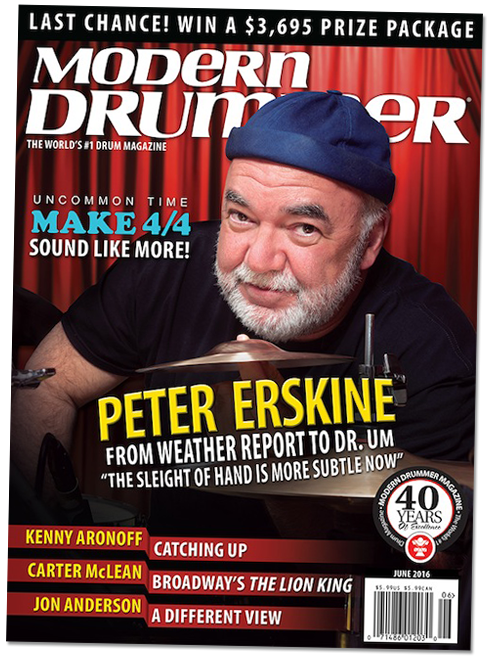 “Can we still keep getting better as we get older? It is possible. But art is deffinitely a two-way street, and a commitment.”
With the recent release of a new solo album, a big band app, and a Weather Report box largely made up of recordings from his own personal collection, Erskine is clearly as committed to furthering the art of drumming as he’s ever been. – by Rick Mattingly
Cover and contents photos by Alex Solca

His childhood in Cuba provided him with inherent musicality. Conservatory training and the experience brought by thousands of working hours gave him the rest of what he needed to become one of the most in-demand players in L.A. – by Robin Tolleson

As long as there are players like him keeping the fl ame alive, the breakthroughs of legendary educators like Sanford Moeller and Jim Chapin will continue to live on. – by Ilya Stemkovsky

PAUL WELLS defines the word authentic with the pre-swing jazz institution Vince Giordano and the Nighthawks—then turns around and backs the contemporary jazz and pop vocalist Curtis Stigers. It’s all in a day’s work. – by Jeff Potter

As a founding member of Yes, prog’s most famous band, he helped push rock music well past its original borders—lyrically, melodically, and rhythmically. – by Adam Budofsky

Teacher’s Forum – Those Who Can, Teach

AN EDITOR’S OVERVIEW – The Art of No Ego

Inside Methods Denny Seiwell’s What Not to Play!