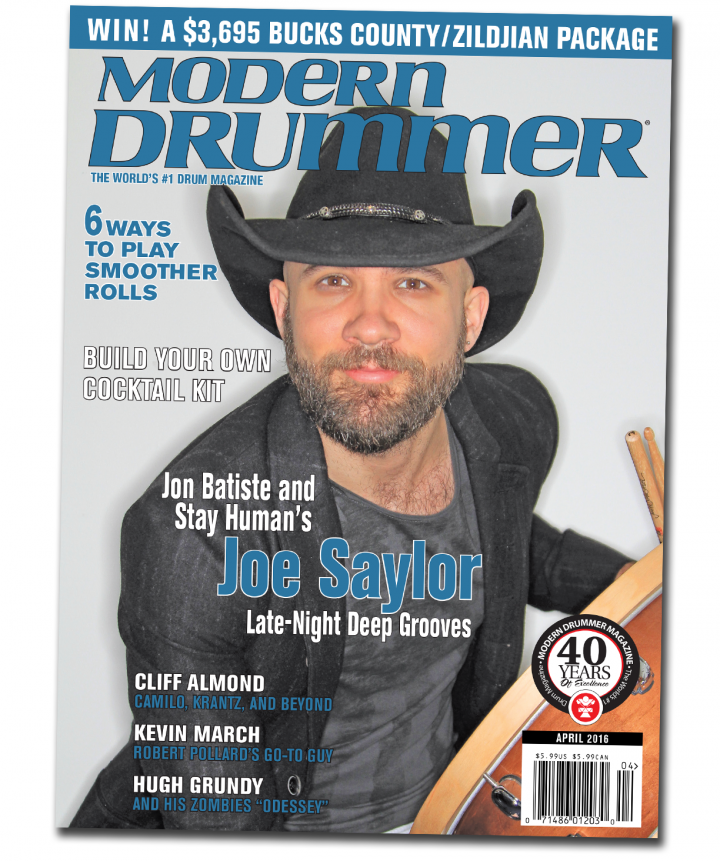 “The place you really learn how to play is on the bandstand. And it helps learning with people who can really play.”
If you’re wondering how Jon Batiste and Stay Human—including their real-deal drummer—can bring such an authentic, infectious vibe to The Late Show With Stephen Colbert, all you need do is check out where the band members cut their teeth. – by Jeff Potter

HUGH GRUNDY’s hook-filled playing on the Zombies’ “She’s Not There,” “Tell Her No,” and “Time of the Season” represents the epitome of sophisticated, swingin’ British Invasion drumming. Fifty years on, recognition of his talents is at an all-time high. – by Dennis Diken

CLIFF ALMOND may be a self-described “ex-Weckl clone,” but the New York–scene vet has more than come into his own, with Michel Camilo, Wayne Krantz, and the popular Japanese band Quruli. – by Ken Micallef

KEVIN MARCH made his name as a top-tier indie-rock journeyman with the Dambuilders, the Rentals, James Iha, and Shudder to Think. And for the past decade he’s been the go-to drummer with Guided by Voices’ impossibly prolific frontman, Robert Pollard. – by David Jarnstrom

GEORGIA HUBLEY and her beloved alt-rock band, Yo La Tengo, have been making magical music together for more than thirty years. MD sits down with the group’s founding drummer/singer to trace her unique history. – by Patrick Berkery

Strictly Technique : A Twist on the Buzz

The “Greatest” Drummers and the Bliss of Ignorance – by Russ Miller

AN EDITOR’S OVERVIEW Time for a New Face

Kit of the Month The Frankenstein