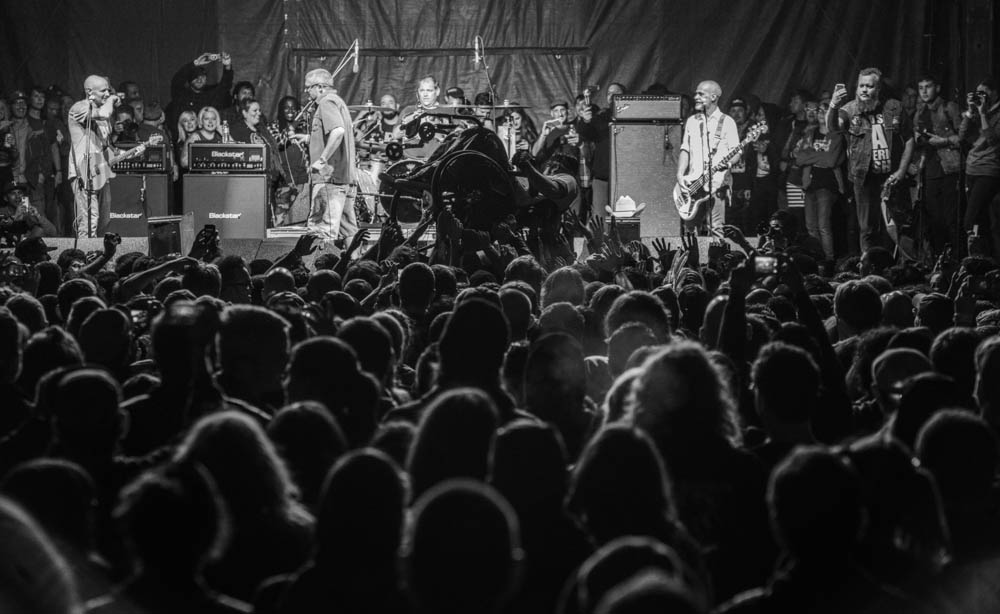 While we have a different festival of some kind nearly every other week here in Austin, Texas, one seems to set itself apart for some of us, and that’s Fun Fun Fun Fest. Fun Fun Fun Fest had its eighth go-round this past November 8–10, and it was three days of great music for fans of metal, indie, hardcore, electro, and hip-hop, as well as wrestling, comedy, skateboarding, and BMX. I made the hang with a few of my favorite drummers on the bill and thought I would pass along what they were up to. 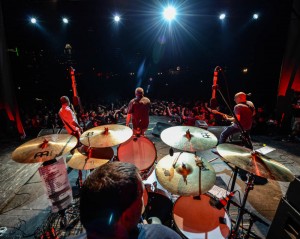 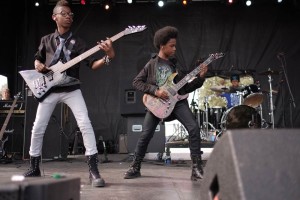 Saturday night, as I was walking to the black stage to check out Bill Stevenson (again!) with the Descendents, I ran into the coolest band of eleven-year-olds: Brooklyn’s Unlocking the Truth. Their drummer, Jarad Dawkins, has been playing since age two and works in a lot of rudiments around the kit. Unlocking the Truth sounds heavy well beyond their years, and Jarad cited some of his favorites as Metallica, Slayer, Disturbed, August Burns Red, Megadeth, Pierce the Veil, and Betraying the Martyrs.
Dismemberment Plan drummer Joe Easley’s current day gig is as a robotics engineer for NASA, and being that he and I are both from Northern Virginia, we couldn’t help but discuss the influence that the DC hardcore scene has had on our playing. “Zach Barocas, who used to play in Jawbox, was an animal—just the most precise player, and he does really cool stuff,” says Joe. “We played some tours with them early on, and he had a big impact on what I do. Mike Russell from Shudder to Think was also great. Brenden Canty from Fugazi was weird and loose and I don’t understand how he plays, but he is a sick drummer.” Easley has been playing the same Yamaha Maple Custom kit since the ’90s and is particular enough about his setup that he packs cymbal stands in his luggage, even for fly-out dates like this. “I actually have measurements of my cymbal stand heights,” he says. “It’s nice having all the right felts so I know the action of everything, but it’s also a bit of a good luck thing.” The recently reunited Dismemberment Plan sounded great on new songs and had the crowd singing along to fan favorites like “You Are Invited.” It was definitely a highlight of the main stage on Sunday.
Getting to see the current incarnation of the Cro-Mags on Sunday was another big deal for me. After I watched him destroy a set of hardcore classics, I talked to original drummer Mackie (Maxwell Jayson) about his musical roots and what he’s been up to. When asked for a singular moment that got him into drumming, Mackie recalled seeing Buddy Rich on a Schaefer Music Festival concert in Central Park and eventually attended the New York High School of Performing Arts. Punk rock was admittedly not his thing until he became friends with the Bad Brains. “I used to hate punk rock,” says Mackie. “I hated the Cro-Mags, and I was in the band! But I get it now like I get AC/DC. It might not be technical, but it’s just dope! Me and the guys in the Bad Brains…We liked all of this jazz stuff and R&B. They were telling me that punk rock was dope, and I was like ‘Well, it must be!’ If Miles Davis heard the Bad Brains, I bet you he would’ve liked them.” Fittingly, Cro-Mags played two Bad Brains songs in their set. (Mackie played on their albums Quickness and Rise.) Life has taken the drummer all over the place, from jingle work in NYC to spending many years based in London with the Fun Lovin’ Criminals. He has a new fusion project with Dr. Know and Daryl Jenifer from Bad Brains, as well as another project with Chino Moreno from the Deftones and some spring dates in Europe with the Cro-Mags.
Last but not least, I bumped into my friend John Speice IV, who you may know from the Grammy-winning Grupo Fantasma or their funky alter ago Brownout. Speice was backing up Daniel Johnston at the festival and a week prior he played with the Wu Tang Clan’s GZA. “In both cases, the music is very simple from a drumming perspective,” says Speice. “But you’re working with two people that were so important to their genre. When we played behind GZA, there were people with tattoos of the full artwork from Liquid Swords who knew every word of the record, and it’s kind of the same thing with indie rockers and Daniel Johnston, where every lyric means something to someone.” 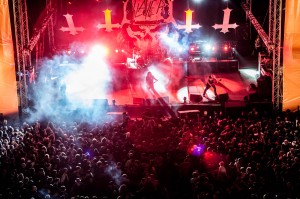 Here come some stray observations from the festival. First, I got my metal fix from Gojira and August Burns Red, both new to me and awesome in completely different ways. I never thought I would hear any of Television’s Marquee Moon live, but I heard most of it. I never thought I’d see Ice-T and Body Count in the same day again, but twenty-two years after seeing them for the first time, there they were. A late-starting Johnny Marr show made for a short Walkmen set. Quicksand killed it, right before Flag, who also killed it. Tenacious D, Melt Banana, and Sparks all came to the fest without a drummer, but were still mostly awesome. Slayer, with Paul Bostaph on drums, was in top form and is still the best thrash band in the world. Snoop Dog, Big Freedia, Jurassic 5…I’m barely scratching the surface of this thing.