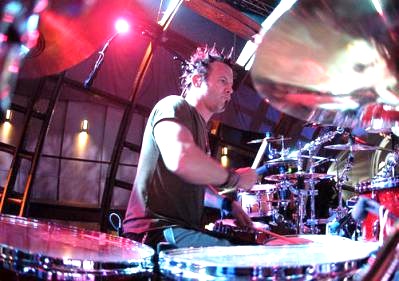 Yo, MD!
A lot going on these days! As of late last year, I finished up a world tour and DVD with Avril Lavigne. Earlier this year was the release of Tall Stories, a recording I did with ex-Journey frontman Steve Augeri. I reacquainted myself with the New York City scene, recording for various artists there, and reconnected with Gavin DeGraw for a U.S. tour supporting his latest. And I learned just before leaving that I was named #2 pop drummer in the 2009 MD Readers Poll. I was convinced I was being punk’d by all these texts from my buddies, but no–my name is actually right there on the pages of MD, beside the Guys That Are So Badass They’re Called Only By Their First Name. Wow! I don’t care how clichéd this sounds: It’s a complete honor to be in that company. Thanks, guys–whoever voted for me, you’ve made my mother very proud!
On the drum-geek gear tip, I’m LOVING playing big cymbals lately. Some of you might know that this last tour with Gavin DeGraw was intentionally stripped down, contrary to his normally un-singer/songwriter-y, very rock-ish vibe. I found myself playing a lot of rods, brushes, shakers, etc. (plus a 20″ Pearl Masters Maple kick, wide open, no muffling, no holes, ha!). It was WAY different from the hard-hitting Avril vibe I’d been playing for the last two years. I ended up with an 18″ Sabian Donati crash, 22″ Artisan ride, 20″ Ozone ride (as a crash), and whopping 18″ hats made up of Artisan and Vault crashes. I found the bigger sizes responded way better to the brushes and rods, and there was something incredibly cool about playing “I Don’t Want To Be” softly but still sounding completely rockin’.
Originally I tried the 18″ hats to get a less “flitty,” more raw, organic hat sound, and man did I get it–but I found that when I went back to set up for the more rock-edged European tour, my old 14s felt like toys! Enter Bobby Boos and Mark Love at Sabian. Short story: I’m a 16″ hats guy now. Yes, to me the new standard is 16″. At least for now. If there’s one thing I’ve learned from the last few years, it’s that when you keep your heart, mind, and ears open and assume nothing, cool things happen.
Thanks for reading my ramblings. And remember, in this digitally hip day and age, the privilege of HITTING THINGS for fun and for musical gratification is special. Enjoy it!
Rodney
For more on Rodney, check out his myspace page: www.myspace.com/rodneyondrums.