Recording the first Moonalice CD with producer T-Bone Burnett was one of those experiences that I never wanted to end. T-Bone (with his skilled engineers) created an organic, relaxed, and creative environment, one in which I felt completely free to be me. The approach brings out the true heart and personality of a musician.
The drumset I played–1930s Leedy with goat and calfskin heads–is the set chosen by T-Bone for every project he produces. The first time I played the 26″ bass drum, the note rang until Labor Day. The entire set resonated that way. It allowed me to play very simply, producing a deep, warm, simple, earthy sound that provided a gigantic foundation for each song. It also changed the way the other musicians in the band approached their own parts. Each of us became committed to the song and the depth of it. A synergy was created that seemed to ring throughout the sessions.
For me, the CD represents Moonalice as a band of songwriters and the musicians that support those songs. The solos are statements that complement the hearts of the songs. I’m proud of this record. Recording it was inspiring and, in the end, very rewarding. I’m looking forward to going into the studio with T-Bone and the band again in May for our next project.
Moonalice’s debut album will be released on April 14. For tour dates and more on the band, visit www.myspace.com/moonalice.

On the Beat With Andrew Campanelli of the Revivalists: Talking Go-Go Rhythms and Men Amongst Mountains

Gabriel Serbian of The Locust 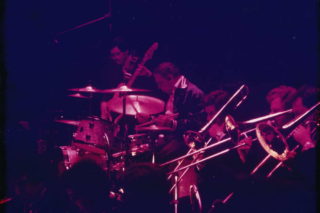 On The Beat with DW Founder Don Lombardi: Remembering Buddy and His DW Kit