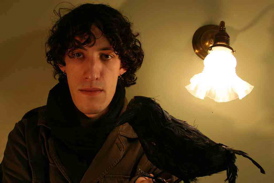 Hello, everyone. It’s nice to meet you! I play in the American rock band Carlon, based out of New York City. Music has been the biggest part of my life since I was able to comprehend the feelings it created within me. My first memories are of crawling to a speaker while Pink Floyd was playing. I wanted to be closer to the music. I leaned my head up against the speaker to try and figure out how such beautiful sounds were coming out of a stationary object in my house. I wanted to be part of what was coming out; I did not just want to sit passively and listen.
This is how music began for me, and still to this day I try to figure out how to be inside of what’s happening while I’m listening. Have you ever heard a song and been so overwhelmed by what was going on that you wanted to climb through your headphones and actually be a part of the song? I love that feeling. I know it occurs for lots of people who listen to many different types of music. It is not just reserved for those who ‘understand’ the concepts of what’s going on musically. Anyone who can become emotionally attached to a feeling within a song can experience this. Why do people need to know the theory and technicalities of music in order to understand it? They don’t. That’s what’s beautiful about music: It’s for everyone, not just those who study it.
Playing music is a different story. Many times I have been told that what I’m playing is neither complex nor revolutionary. That isn’t important to me. I don’t play with my brain, I play with my soul–and therefore I am completely attached to what I’m creating. Ultimately, I am making music for the overall listening experience, and if I’m unnecessarily busying the music, it will suffer. Ever play with a guitar player who just wants to solo? Sometimes it sounds good, but most of the time it’s old and you just want the guy to shut up and play some rhythm. It goes both ways. The music won’t sound good if I’m trying to show off.
Usually the first part of a Carlon practice is a jam. Sometimes this will last for ten minutes, and other times it’ll last for two hours. It allows us not only to warm up but also to explore new possibilities and become more familiar with each other’s playing. There are moments for each of us to shine during these improvised journeys, but there are also moments for us to put just the slightest bit of color on the artwork that we are spontaneously creating together. Sometimes these moments are the most magical and memorable, and they’re some of my proudest achievements as a musician. In the end, if my band sounds good, I sound good. I am not doing this for myself.
The best lesson I can teach is to love the music you play. Become the music you play and allow the music to steer you in the direction it wants to go. Remember that showing off is for magicians and politicians; it only gets you cheap applause and not a genuine emotional response. Which is more important to you?
My band’s album is called Johari Window, and it’s being released on Ropeadope Records this March. We will also be headlining the Ropeadope stage at South by Southwest.
Thank you for listening.
Visit the band at www.carlonmusic.com.