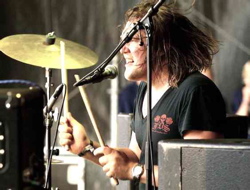 Hi! I’m Marcus, the drummer in The Windupdeads, and I’m very honored to be writing for the Modern Drummer blog.
I’ve actually never seen myself as a drummer–I started playing guitar in my early teens and was the front man in a couple of bands–but when I think about it, I’ve played drums in different bands for the last ten years. When my older brother Henric asked me if I could play the drums in his band Dry Dive, I was stuck. We recorded an album that was released in Sweden way back. If you want to listen to my first attempt, there’s a link below.
I’ve never taken any lessons, and I don’t practice that much. Drumming for me is all about finding the groove and not that much about technique. Of course I get impressed by drummers who can do crazy drum fills, and I’ll admit that I do try some tricks myself sometimes. But nothing beats a good-ol’ 4/4. It also helps when you play with a skilled bass player, like Jonas Westholm in The Windupdeads.
We recently finished the recording of our self-titled debut. We recorded it over quite a long period of time, so we used different recording methods for different songs. Some tracks I recorded with the whole band playing together, but on most of them I recorded by myself at first. I’m quite active in the band’s songwriting, so I often think it’s easier to imagine the song in my head and then play it to only a click track.
We thought it would be a bit boring to record all the songs with the same drum setup, so we tried to make the drums fit the mood of the song. To make that happen, we used different kinds of rooms to get the right size of the sound, because I hate to use artificial reverb in the mix. I also prefer the drums to be almost mono in the mix and the guitars panned out, which creates the feeling of a stage setup when you listen to the songs in stereo. It doesn’t work all the time, but I think it’s a good base.
When arranging a song, I think the drums shouldn’t steal the focus of the melody, because the melody is always number-one for me. Drums are often best if you don’t take special note of them. I think a good drum fill is best used as an effect in a song. Some bands manage to make catchy tunes with messy beats, though, a good example of that being the Danish band Mew.
Now I really long to get out on the road with my band, and thanks to PDP drums and Sabian cymbals, I’m able to do that with top gear. That helps a lot.
I think the songs come to life best in a live situation. It’s great when you get that immediate response from the audience. One thing that can be challenging when performing live is the monitoring. I sing most of the backing vocals, so I need to have good monitoring, and that unfortunately isn’t the case all the time. You can easily feel a bit silly, screaming out and only hearing crashing cymbals–but what the hell, it’s rock ‘n’ roll!
Marcus von Boisman
For more on Marcus, go to www.myspace.com/thewindupdeads or www.myspace.com/drydive.