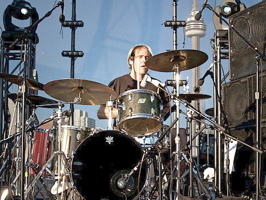 Hello, Modern Drummer blog world! When asked to write something for this, I was thrilled, because I grew up reading MD and I honestly have to say that the magazine and its consistent content taught me so much about drums, drummers, and drumming technique. I never really had the means to study with any local drum teachers, so I’m pretty much self-taught. But I always tried to absorb everything I could from the pages of MD to add to what I was listening to and teaching myself (i.e. Garibaldi’s funk drumming articles and Rod Morgenstein’s pieces here and there). Besides the obvious need to sell magazines to keep the ship afloat with articles and features that highlight popular drummers in popular bands, MD has always dedicated much of its content to education and letting the readers in on some real valued wisdom from some of the greatest drummers of every era and style, whether they be in popular bands or not.
My name is Bob D’Amico, and I play in a band called The Fiery Furnaces. We’re out on tour right now in the middle of a three-week trip that brings us to the Bonnaroo Music Festival at the end, then back home again to NYC. Those of you not familiar with the band should know that touring with this band is different every time. The instrumentation frequently changes, as do the musicians and the way in which the band approaches the songs. There are some songs I’ve played with this band in seven or eight completely different ways–stylistically, tempo-wise, dynamics, etc. There’s also tons of room for improvisation with these songs, and with this approach to looking at the set and live performance in general. In jazz that’s how it goes every night, but with rock bands this doesn’t happen very often, so playing in this band is a lot of fun for me.
So, this tour isn’t any different. The instrumentation for this trip is as follows: piano/synth player; rhythm guitar; lead guitar; glockenspiel player who uses thimbles on her fingers to strike the keys and who also plays a toy Casio synth; vocals; and drums, including some blocks, bells, and timbale for extra effect.
Sometimes this approach works great and sometimes it seems to fall short (depending on who you ask), but it’s always daring, exciting, and interesting to me. I also feel that way about my drum parts for these songs for this tour: Some really fall short at times and some work well, but I’m always going for it, even if the result isn’t so hot.
So the point I’m trying to make is that drumming is a lot like being a pitcher in a baseball game: Some games he might have his best “stuff,” and some games it just isn’t happening. I definitely feel that way sometimes during a gig, but my job and the pitcher’s job is to just keep the team or the band in the game and give them a chance to win or have a good show, even if you stink that particular night. When you play a gig every day on tour, you’re not going to feel good about your playing every night. But I think you have to keep that in the back of your head and make the best of the situation. Try to always attempt new things and new approaches, and do not play it safe no matter how weird you feel. Just provide the rhythmic framework that’s needed to move the songs along and keep the other musicians in the pocket, but keep going for it even if your “curveball” isn’t breaking the way you’d like, so to speak.
There is a new Fiery Furnaces live album coming out on August 19 on Thrill Jockey Records. Please check it out if you can, and hopefully I’ll see you at a gig one of these days in your town.
Thanks!!
For more on Bob D’Amico and The Fiery Furnaces, go to www.myspace.com/bobdamicodrums, www.thefieryfurnaces.com, or www.thrilljockey.com/catalog/index.html?id=102862.